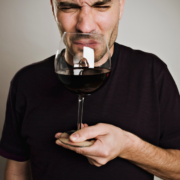 If you look forward to opening a bottle of wine at the end of a long day like so many wine drinkers do, you’re probably expecting to smell the familiar fruity, floral or earthy aroma of your favorite wine. But every once in a while, that lovely aroma is replaced with something unusual or even downright disgusting. This is often a sign that your wine is corked. So, what does that mean, and how can you tell if your wine is corked or if there’s something else wrong with it? Here’s what you need to know about corked wine.

What Causes a Wine To Be Corked?

First, you should get to know what corked wine is, starting with what causes it. Simply put, it means the cork in the wine has cork taint, which has contaminated the wine itself. So, what’s cork taint? It means there’s a chemical called 2,4,6-trichloroanisole, or TCA, within the cork.

TCA is created when fungus that’s naturally occurring in cork trees comes into contact with chlorophenols, which can be found in preservatives, pesticides and even the bleach used to sanitize surfaces. When cork trees soak up the chlorophenols, they’re converted into TCA, which stays with the cork even once the material is turned into wine stoppers. The TCA then transfers to the wine once it’s been bottled and had a cork put on.

As you can see, the cause of corked wine involves nature, since wood is always going to attract microorganisms—like fungi—that eat it. As a result, it can be hard to prevent wine from becoming corked. Granted, many wineries have tried to reduce the chances of this issue by avoiding using bleach when sanitizing. But there’s still a chance of this natural issue occurring, so any wine drinker should know the signs to look for in corked wine.

Many people say it smells like a wet dog or a damp basement. Others have said it reminds them of a damp newspaper or piece of cardboard. And this makes sense given that fungus is a big part of the chemical reaction that causes wine to be corked.

Not surprisingly, corked wine doesn’t taste any better than it smells. If you somehow get past the smell—or if the smell is subtle enough for you that you don’t notice it right away—you’ll likely note that it just tastes off. It might even taste like soggy cardboard. At best, you’ll notice that the wine lacks much flavor at all since the cork taint can remove the fruity or floral flavors you’re looking forward to.

The good news about corked wine is that it’s technically safe to drink. It just smells and tastes bad, so you probably won’t want to! But this might give you some peace of mind if you accidentally drank from your glass of wine before you realized it was corked.

What If You’re Not Sure If It’s Corked?

Now you know what kind of aroma and taste to expect if the wine is corked. But it’s not always obvious that cork taint is the problem. You might second guess yourself, especially if it’s a new wine you’ve never tried before since maybe it’s supposed to taste and smell this way. And, if no one around you notices that the aroma and flavor are off, you might assume you’re wrong about it.

So, it’s a good idea to consider possible alternatives. For example, let’s start with the fact that wine can only be corked if it’s stopped up with an actual cork. And it has to be a real cork, not the plastic kind impersonating a natural cork. So if the wine stopper on your bottle looks like cork but feels like smooth plastic—and is not squishy like a real cork—the wine isn’t corked. And of course, if your wine is in a screw cap bottle, it’s not corked.

Let’s say your bottle of wine has a real cork, but no one else who smells or tastes the wine is complaining. In that case, it may be that you’re super sensitive to the smell of corked wine—or maybe it’s a problem with your palate. Try some water or your favorite food and see if it tastes normal to you. If everything tastes or smells a little off to you and everyone else in your party is enjoying the wine, it’s probably not corked.

Even if everything else tastes normal to you, but the wine tastes bad, there’s a chance it’s not due to cork taint. It could just be that you don’t like the aroma or flavor of the wine. If no one else was making a face when they opened the wine bottle and poured the first glass and they’re complimenting the flavor, it’s likely not corked.

What Can You Do About Corked Wine?

If it seems clear that your wine is corked, the next step is figuring out what to do about it. Is there a quick fix, like shaking the bottle or diluting it with another liquid? Sadly, the answer is no. You can’t fix a bottle of corked wine. The only way to solve this is to take it back to the store you bought it from and explain the issue. You’ll likely get a refund or a different bottle of wine. If you ordered your wine at a restaurant, let the server or bartender know that the wine seems to be corked and you’ll quickly get a replacement.

Corked wine isn’t fun, but it’s an occasional fact of life when you drink wine. Luckily, the majority of bottles you buy won’t face this issue, as only a small percentage do. So try to focus on the delicious wine that’s available to you, including Sweet Oaks products. From Syrah and Chardonnay to Pinot Noir and Grenache, we have a wide variety of wine you’ll love, so shop on our website today! 6 Things to Look for in a Temecula Vineyard Tour