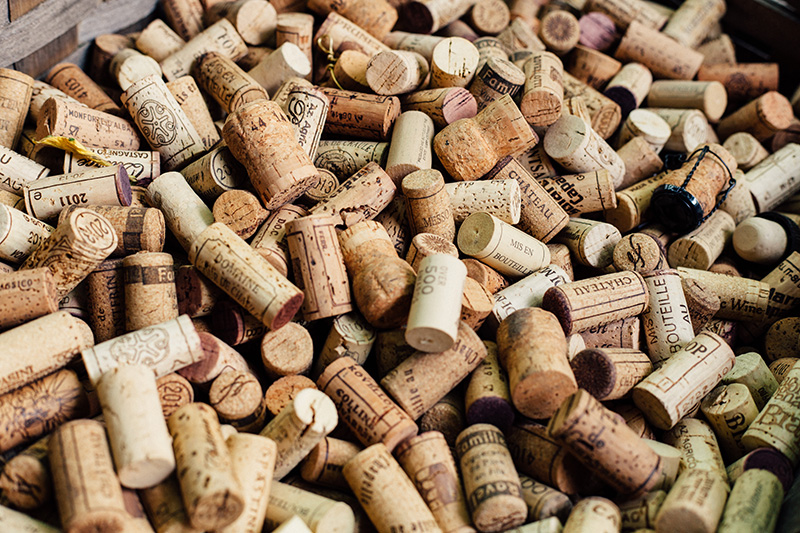 Before winemakers began using corks, oil-soaked rags were stuffed into the necks of bottles to preserve wine. It wasn’t until the 17th century that natural corks became a popular replacement. Corks were a huge improvement from rags and are still the main product used today to store wine. Corks have the power to improve a wine’s quality over time, but they also have the power to destroy a wine.

As mentioned above, most bottles of wine today are sealed with corks. For a while, limited options prevented winemakers from using other means to seal off bottles. But as the art of winemaking progressed and new products, like screw caps and glass tops, were introduced, many winemakers still showed an overwhelming preference for corks.

How come? Because corks do something that screw caps and glass tops can’t.

While oxygen is typically the main culprit for spoiled wine, it still plays an important role in helping wine develop and stay fresh. This is where the corks come into play. Corks severely decelerate the oxidation process in bottled wine—but they don’t block oxygen out completely—which allows wine to age better and taste better over time.

The best corks allow about 1 milligram of oxygen to come into the bottle each year. This amount of oxygen works to remove the sulfites that were added in the bottling process. A minimal amount of air needs to interact with the wine to allow it to develop its mature, secondary qualities, expel unwanted aromas, and reach its full potential as envisioned by the winemaker.

To back these claims, many winemakers have conducted side-by-side tests to compare the difference in taste and aroma between wine sealed with corks and wine sealed with screw caps. In one such study, Maggie Kruse, the associate winemaker at Jordan Vineyard & Winery in Healdsburg, California, bottled ten cases of the winery’s 2001 Chardonnay with screw caps and she sealed ten cases with natural corks. The lead winemaker Rob Davis and his staff tasted and evaluated both sets of wine every few months for five years. By the end of the five years, Davis and his team agreed unanimously that the aromas and flavor profile of the cork-sealed wines were significantly better than the wine sealed with screw caps.

The results of their study match countless others conducted around the world. Corks allow wine to age with a grace and complexity that screw caps and glass tops simply can’t. However, this isn’t to say that screw tops and other wine seals or stoppers never have an advantage. Unfortunately, corks have a dark side.

Nothing beats the sound of the slight pop that comes from a wine bottle being uncorked. But the uncorking ritual doesn’t always lead to a happy ending. Sadly, around 2-3% of wine is “corked”, an expression that means the cork has tainted the wine.

This is the dark side of corks. And while 2-3% doesn’t sound like a lot, if you have the misfortune of gulping down corked wine, then those numbers seem a bit more menacing. The unsavory taste of corked wine is not easily forgotten.

So what exactly is corked wine? Well, the term “corked wine” describes a wine that has become tainted by the cork with a chemical compound called TCA (2,4,6 trichloroanisole). TCA is formed when natural fungi that often reside in cork interact with certain chlorides found in bleaches and other winery sanitation/sterilization products. A cork infected with TCA runs the risk of not just contaminating the bottle of wine it seals, but can potentially infect an entire cellar or winery with TCA.

Despite its devastating effects, the cause of cork taint wasn’t discovered until the early 1990s. Since then, most wineries avoid using chlorine-based cleaning products, which greatly decreased the amount of wine from becoming corked.

It’s clear that a wine has been corked by its smell and taste. Corked wines smell and taste of damp, soggy, wet or rotten cardboard. Some people also refer to the scent of tainted wine as a wet dog. The smell alone can make an expensive bottle of wine seem unappealing, but the smell isn’t the only part affected by TCA. Cork taint dulls the fruit in a wine, renders it lackluster, and cuts the finish.

The obviousness of the corked smell and taste depends on the extent of the taint and your sensitivity to its presence.

With the right preventative measures, natural corks are very unlikely to get infected with TCA. As more winemakers eliminate the use of chlorine based cleaning products, the number of corked wine drops. Wines that are meant to age absolutely benefit from cork seals and should not be sealed with screw caps or other stoppers. But that isn’t to say that corks are the only appropriate seals for wine bottles. Wines that are supposed to be consumed within a year or two work great with screw caps, glass tops, and stoppers.

So, if you’re not planning on storing a wine long-term (over 2 years), then screw caps are a safer choice as they don’t run the risk of cork taint. That said, screw caps don’t uncork with a satisfying pop, so it really depends on your preference.