How and When to Use a Decanter - Sweet Oaks Wine
Blog 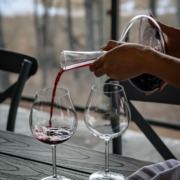 There’s a certain level of mystery when it comes to decanting. What wines should be decanted? How do you successfully decant? Is it necessary?

Although it may seem like decanting first evolved in high-end restaurants, wine vessels date back thousands of years. These vessels were made from bronze, silver, gold, and even blown glass. By the 17th century, it was customary to pour wine from its bottle into a jug or other container before serving. By the 18th century, decanting became a tradition in England. Today, we know more than ever about the properties of wine — and decanting plays on that knowledge.

Whether you recently received a decanter as a gift or have had one for years, collecting dust, a little insight into decanting 101 can transform your wine tasting experience.

This guide covers everything you need to know about decanting.

Why Decant Your Wine?

When you decant wine, it can become the best possible version of itself.

Dr. Gavin Sacks, a professor at Cornell University’s Department of Food Science, said, “Decanting dates back to alchemy when it was described as removing the liquid part of a mixture from solids.” So, separating clarified wine from the solids in the bottle was the initial concept behind decanting.

Decanting can also be a saving grace in the unfortunate event of a broken cork. The decanting process also adds to the overall wine-drinking experience. For many, that’s what it’s all about.

Recommended reading: How Long Does Wine Last Once It’s Been Opened?

How to Decant Wine

Typically, wine is stored on its side. If you plan to open a bottle that potentially has sediment in it, allow the wine to stand upright for 24+ hours to allow that sediment to settle. If you’re pulling a bottle from a horizontal storage unit, some recommend allowing the bottle to sit vertically for a couple of days. However, even a couple of hours is better than nothing.

If a bottle of red is five to ten years old, it’s safe to assume that there will be some sediment.

How you use a decanter will depend on the type of wine you’re decanting.

How long you decant will depend on the wine. For example, many light-bodied wines, such as Grenache, Pinot Noir, and Zinfandel, only need 20-30 minutes. A medium-bodied wine, such as a Merlot or Malbec, can be decanted for 20 minutes to an hour. Finally, full-bodied reds, such as Cabernet Sauvignon or Nebbiolo, may not fully develop until decanted for one to two hours.

Ready to experiment with your decanter? Whether you’re hosting a wine tasting event or are planning a special night in for you and your partner, check out Sweet Oaks wine. 6 Tips for Attending a Wine Tasting