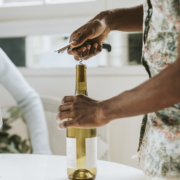 If you look forward to the satisfying sound of a wine cork popping off to signal the end of your workweek, you’re certainly not alone. For more than 400 years, that has been the universal, traditional sealing of wine. These days, however, there’s another increasingly popular way to seal a bottle, and that’s with a screw cap. Now sit back and relax with your favorite glass as we go through the intricate details of the essential differences between wine corks and screw caps and how each seal affects the bottle of wine underneath.

What to Know About Wine Corks

First, keep in mind that what is most important is that the bottle is sealed correctly, regardless of what material the stopper is made out of. After all, the point is to stop large amounts of oxygen from getting into the wine bottle. While small amounts of oxygen are okay, too much can negatively affect the aroma and taste of the wine. In addition, wine stoppers are supposed to be a barrier against anything else that would alter the taste of the wine, including mold and bacteria.

This leads us to the most popular type of wine stopper: the wine cork. Made from the bark of the cork oak tree, this type of stopper can keep out most contaminants while letting in a small amount of oxygen over time. While corks have been considered the gold standard of wine stoppers for centuries due to some significant benefits, they also have some drawbacks to know about.

Pros and Cons of the Wine Cork

The main advantage of the cork is that it’s environmentally friendly, as it’s a renewable resource. This is because cork oak trees are relatively abundant in countries like Spain and Portugal, but their outer layer of bark regenerates often. As a result, you can make hundreds of wine corks from a single oak tree without harming the environment.

Another advantage of wine corks is that they’re porous, so that they can let in a small amount of oxygen over the years. For some wines, this slightly changes the taste for the better and smooths out the tannins, helping with the aging process. In most cases, this benefits fuller red wines.

Of course, corks aren’t without their faults. For example, there’s always a chance of trichloroanisole (TCA), also known as cork taint. This is what happens when mold gets through the cork and contaminates the wine, leaving it with a musty, moldy flavor and aroma. In this way, a wine cork can ruin wine if that particular cork is too porous letting too much oxygen or other contaminants in.

There’s also the fact that you need a unique tool—whether a traditional corkscrew or a more advanced wine opener—to pull a cork out of the bottle. Then there is the possibility of the cork getting stuck or broken if the opener is used incorrectly, crumbling into the bottle of wine. So while corks certainly have their advantages, there are a few reasons some people prefer the alternative: the screw cap.

What to Know About Screw Caps

A much newer, more modern way to stop up a wine bottle is the screw cap. This type of stopper is made of aluminum, with grooves that fit into the wine bottle’s grooves to screw on and off easily. Screw caps started becoming popular with wineries in the 1950s.

The most popular screw caps have a plastic liner that creates a seal, ensuring that oxygen doesn’t get into the wine. Many also feature a metal skirt that looks similar to the foil you’d find on top of a corked bottle of wine. Of course with new options for wine toppers, there are pros and cons to this wine cork alternative.

Pros and Cons of the Screw Cap

Another advantage is that screw caps don’t let oxygen in overtime like corks often do, meaning there’s no chance of them changing the flavor and aroma of wine over the years. For this reason, screw caps are considered ideal for wines meant to be consumed early on rather than after a lengthy aging process. This makes them incredibly suitable for white wines and lighter red wines.

Of course, with screw caps, you won’t encounter cork taint. As a result, there’s no chance of your wine tasting musty or moldy due to TCA. There’s also no possibility of accidentally getting crumbled cork into the wine after breaking off pieces of the stopper.

There are some distinct disadvantages of screw caps. First, while they’re easy to take off, you don’t get that satisfying sound and feel of slowly opening the bottle as you do with cork. If you’re big on tradition, you might miss this part of opening your wine. In addition, screw caps aren’t biodegradable, so they’re not eco-friendly like corks are. Finally, there’s a slight chance that the aluminum cap could leave the wine with a metallic taste that you don’t want.

Which One Is Better?

As you can see, there are pros and cons to both corks and screw caps when it comes to wine stoppers. For this reason, there’s no way to say which one is better per se, as it mostly comes down to personal preference. The only time a cork is considered better is when you want to store the wine for more than two years, especially if it’s a bold red. Otherwise, a cork and a screw cap are considered about equal, so you should use other qualities—such as brand reputation and flavor—to decide which bottle to buy. You can start by checking out our wines for sale today!